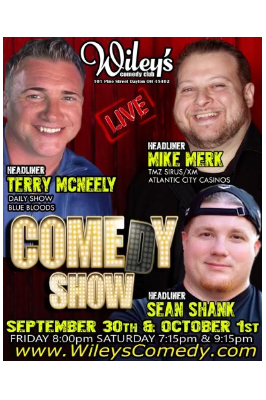 Not one! Not two! But Three Fantastic Headliners! You don’t want to miss this Triple Threat!

Mike Merk was born and raised in Queens, New York and has been writing and performing comedy since he was 16 years old. He has performed in clubs all over New York City and is currently a regular at Caesars, Tropicana and Ballys Hotels in Atlantic City. His constant battle with addiction has influenced a real, raw and honest point of view which shines through in his act. Mike's credits include Sirius XM Radio, TMZ, MTV and his couch in queens where he watches a lot of Netflix.

Sean Shank’s set centers around family life, his college experiences, relationship woes and wins, growing up an isolated and poor country kid, and the things that confuse him. Sean’s ultra-friendly style on stage makes him likeable to audiences and he gets big laughs as a headliner wherever he goes peppering his stories with jokes leading up to great punches at the end!

Sean has been on CBS Stand-up Spotlight, Comedy on the Road, Night Shift, Starmakers, Def Jam, was a five-time Laughfest Pro selection.