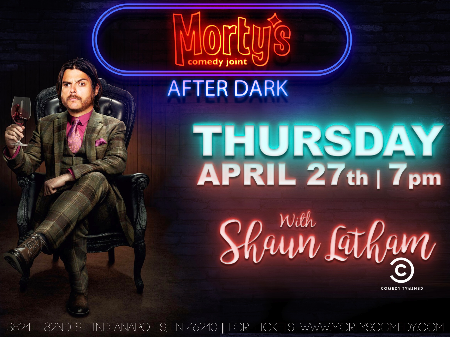 Shaun Latham is the co-host of the hit podcast The Pat McAfee Show and you've heard him numerous times on The Bob & Tom Show. Shaun incites uncontrollable laughter in audiences with his no-holds-barred brand of observational humor and riffs on dating, discount sites, hip hop culture, and other everyday life situations and scenarios.

With his first big screen appearance in the independent film “I’m Not Like That No More” alongside Paul Rodriguez and Felipe Esparza in 2009, Shaun showed his range as an all-around performer.

In 2013, Shaun was a featured headliner on NUVOtv’s “Stand up and Deliver” season 2, as well as an invited guest to the first ever Oslo, Norway Comedy Festival.

Gabriel Iglesias is a huge fan of Shaun’s talents and gave him the “Fluffy” stamp of approval by bringing him on the road for 2 international tours. (Fluffyshop, Stand up Revolution). Shaun made his Network television premiere on Season 1 of Comedy Central’s “Stand Up Revolution” and was brought back for a second appearance on Season 3 in 2014.

Shaun was named #2 in "OC WEEKLY's top 5 comics to watch" in 2015! “Shaun has the gift for gab on the stage and never fails to cap on audience members with the greatest of wit-filled ease. Our advice? Stop what you're doing and get on board with #TeamLazyEye. You won't be sorry.” – Ali Lerman, OC Weekly.

With a perfect balance of polished act and incredible crowd-work, Shaun Latham will absolutely provide you with a show full of side-splitting laughter and great next day water cooler-conversation!