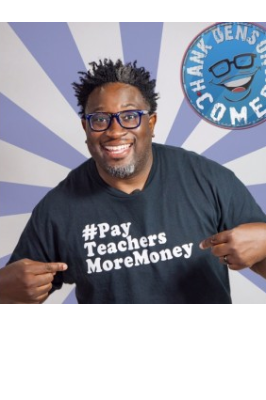 Hank Denson, an Atlanta based comedian, has been making a name for himself on the comedy circuit for the past 12 years. He’s a friend to your favorite comedian, having opened up for Jamie Foxx, Cedric the Entertainer, Amy Schumer, Caroline Rhea, and George Wallace. Hank is a regular guest host on the NBC daytime show Atlanta and Company - and has appeared in Barbershop 3, and the Tupac biopic All Eyes on Me.

It was a random yet honest moment in 2016 that led to Denson becoming an internet sensation. After volunteering as a chaperone during his son’s field trip, a mentally tortured Denson recorded an amusing commentary about his day at the Georgia Aquarium with a group of six-year-old kids. His summation: PAY TEACHERS MORE MONEY! He confessed that after one day with these six-year-olds, he was completely drained and the heroes that do the work everyday, teachers, should be payed more. “Summer school should come with a PSA, ‘Make Your Kid Take a Shower.’ It’s hard to teach in the funk!” jokes Hank.

After receiving widespread support, and over 8 million views for his #payteachersmoremoney movement, Denson has hit the road performing for parents and teachers alike… and even put the call out that if any teacher had a hard day, he would buy them a round of drinks. Denson, who rarely drinks, jokes, “People ask me, ‘Why pay teachers more money?’ I tell them, you go volunteer at your local school… you will need a Hennessy and Coke!”