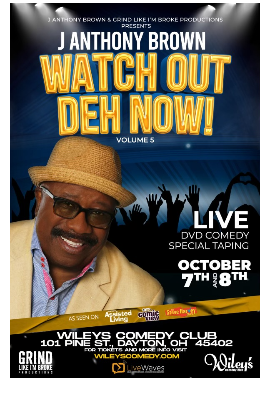 Veteran comedian, actor and established radio personality J. Anthony Brown has performed stand-up comedy all over the country as well as internationally. The self-styled tailor-turned comedian launched his comedy career in a gong show contest in Atlanta. Soon after his comedy debut, Brown moved to Los Angeles to work in television and became a writer on The Arsenio Hall Show, and became a writer as well for such sitcoms as The Parenthood and Me and The Boys. Brown hosted two consecutive seasons of BET’s top-rated Comic View and has performed on Vibe, Def Comedy Jam, It’s Showtime at the Apollo, An Evening at the Improv and The Oprah Winfrey Show.


Brown joined The Steve Harvey Morning Show as one of its dynamic co-hosts in 2017. Based in Los Angeles, he brings his comedic stylings and hilarious cast of on-air characters to the top-rated, award-winning radio program. He was a writer as well on Steve Harvey’s hit daytime TV talk show. Previously, for more than 20 years Brown featured his signature brand of comedy as co-host of The Tom Joyner Morning Show.

As an actor, he’s had recurring roles on Moesha, Living Single, and The Parenthood, as well as guest star roles on Greenleaf, Mann, and Wife, The Rickey Smiley Show, Tyler Perry’s House of Payne, The Parkers and Sparks. His work in film includes roles in The App That Stole Christmas, Think Like A Man, Madea Goes to Jail, Def Jam’s How to Be a Player, Pay the Price, Drumline and Mr. 3000. The NAACP Image Award and Peabody Award recipient is also the designer of the J. Anthony Brown Suit Collection. In addition, he is the owner of The J. Spot Comedy Club in Los Angeles, and regularly produces comedic content for social media and films.

With the South Carolina native’s signature phrase, “WatchOutDehNow,” Brown delivers more mastery with his critically acclaimed artwork. His distinct artistry style and colorful creations have been featured on TV shows, have been auctioned to help provide scholarships to youth and have also become wearable art in some of his clothing designs. J. Anthony Brown is undeniably one of the hardest working people in show business. He never ceases to deliver comedic punches with his down-to-earth and real brand of comedy on TV, film, and radio. He's honored to continue his comedy journey as a cast member of Tyler Perry's Assisted Living