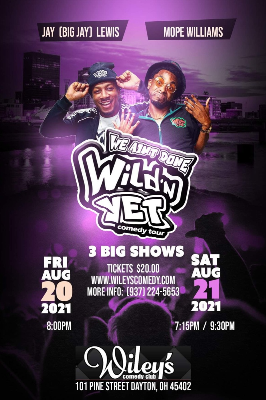 Mope Williams is an American comedian and is one of the recurring cast members since Season 12 of the improv comedy show Wild 'N Out on MTV and VH1. Mope has extensive training in improv and has exploded onto the national stage in MTV's "Wild 'N Out" Season 12. Past affiliations include being a member of the improv comedy troupe Giggle Mafia. He has worked with various comics/artists such as Nick Cannon, Grammy Award-winner Angie Stone, DC Young Fly, Karlous Miller, Michael Blackson, Rodney Perry and many others. Mope has acting experience, has appeared in movies and commercials and has been a featured guest on Kandi Burruss's talk show "Kandi Koated Nights." He also co-starred in the short film "Labour." Mope has catapulted into the entertainment industry and is rapidly making his mark with his multitalented, high-energy performances across the globe.

James Charles Stone III, better known as (Lil JJ) or (Big JJ) is a American comedian, rapper, actor, dancer, and singer best known for starring in shows such as Just Jordan, All That, and The Rickey Smiley Show. He has also appeared in films such as Yours, Mine, & Ours, Beauty Shop, and Brotherly Love and the Movie Friday. Hailing from Little Rock, Arkansas, Lil JJ has been in the spotlight since he was a preteen as he won BET's Coming to The Stage talent search contest when he was just 11 years old. As of Season 12, he is one of the recurring cast members of the improv comedy show Wild 'N Out on MTV and VH1.