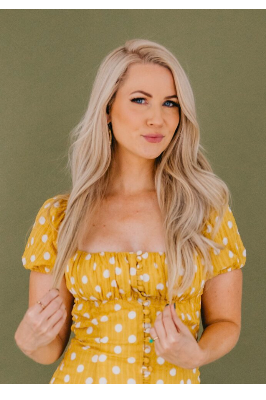 Kelly Collette has been a finalist on CMT's Next Big Comic, and tours clubs and colleges throughout the country. Her jokes have been featured on Pandora and Sirius XM, and in a segment for NPR.

Kelly toured with The Nobodies of Comedy, a national theatre tour of comedians you should know. She will be performing at Gilda’s Laugh Fest in 2019 as part of the selected “Best of The Midwest” showcase.

Kelly is also a featured emcee and storyteller. She has emceed for the Cincinnati Reds and has been a storyteller for "Cincy Storytellers" where you can hear her story on Soundcloud. She also produces a monthly standup storytelling show called “Truth Serum”.

Kelly's writing has been published for Bust Magazine. In 2016 she wrote, produced and directed a parody play called "Reservoir Dames". This all-female adaptation of "Reservoir Dogs" sold out and gained national attention. Her original play “Bloody Mary” (a horror comedy) debuted at the Know Theatre in 2020. She recently partnered with Gorilla Cinema and Pan American Airlines and wrote a script for an immersive 1960s pop up cocktail experience that is traveling the country.

Kelly spoke at the 2020 Ohio Women’s March and was the keynote speaker for Empower Her, a women empowerment event at Cleveland State University.