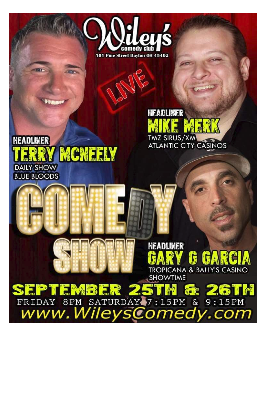 Mike Merk was born and raised in Queens, New York and has been writing and performing comedy since he was 16 years old. He has performed in clubs all over New York City and is currently a regular at Caesars, Tropicana and Ballys Hotels in Atlantic City. His constant battle with addiction has influenced a real, raw and honest point of view which shines through in his act. Mike's credits include Sirius XM Radio, TMZ, MTV and his couch in queens where he watches a lot of Netflix.

With his signature raspy voice and take no prisoners comedy stylings, Gary Garcia, a modern renaissance man, always hits the ground running, leaving everyone in his path in stitches! This hilarious guy brings to the stage his electric, unflinchingly funny take on how he survives in unpredictable world, as a dad, musician, restaurateur, clothing designer and hustler at the game of life. Garcia has mad a mark for himself in stand-up since starting out in New York City doing small bits anywhere he could to becoming a fixture at some of towns most popular venues including the Grisly Pear Comedy Club, Dangerfields, Broadway Comedy Club and others. He has since expanded his repertoire and is now a resident comedian at Bally’s, Tropicana and Caesars in Atlantic City, NJ.